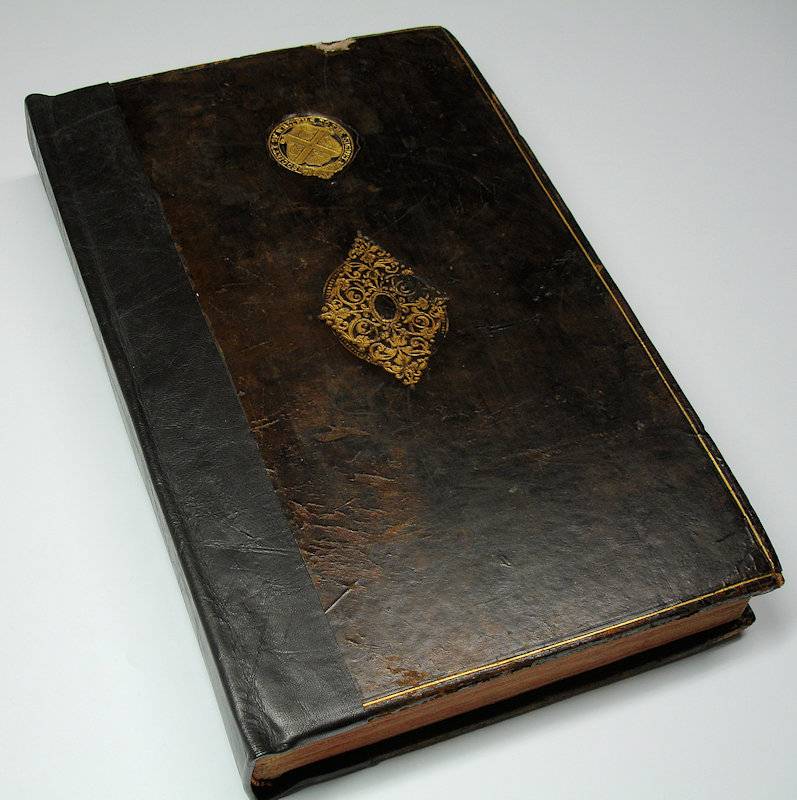 ANTHOLOGIA PLANUDEA. Epigrammatum graecorum annotationibus Ioannis Brodaei Turonensis, necnon Vincentii Obsopoei, & Graecis in pleraque epigrammata scholiis illustratorum libri VII. Accesserunt Henrici Stephani in quosdam Anthologiae epigrammatum locos annotationes. Additi sunt indices tres, pernecessarii. Frankfurt (Francofurti), Apud Andreae Wecheli heredes Claudium Marnium & Iohannem Aubrium, 1600. Folio. (IV),632,30,(29 indices),(1 blank) p. Restored calf. 35 cm (Ref: VD16 E 1640; Hoffmann 1,169; Schweiger 1,30; Brunet 1,308: Édition estimée à cause des remarques nombreuses qui l'accompagnent'; Ebert 691; Graesse 1,143) (Details: Boards with gilt borders. 2 gilt stamps on both boards. Wechel's printer's mark on the title, depicting the winged horse Pegasus gracefully arched over a caduceus that is held by 2 hands emerging from a cloud; the caduceus is surrounded by 2 intertwined 'cornucopiae' and 2 coiling serpents) (Condition: Rebacked with plain black leather. Boards scratched. Corners slightly bumped. Some damage to the calf at the upper rim of the upper board. Endpapers renewed. Paper yellowing. Some small paper repair to 2 leaves. Tiny wormhole in 2 leaves, nibbling at some letters) (Note: The 'Anthologia Graeca', a collection of Greek poems, mostly epigrams, made an enormous impression upon Western art and letters since the Renaissance. Without it our knowledge of Greek poetry would have been more limited. The epigram was for the Greeks a 'vehicle of love poetry, of grief for the departed, of the pleasures and the pathos of simpel life, of wit, of satire'. (J. Hutton, The Greek Anthology in France'. Ithaca, New York 1946, p. 1) Most of the material of the 'Greek Anthology' comes from 2 manuscripts, one containing the so-called 'Anthologia Palatina' (Palatine Anthology), dating from the 10th century, the other the so-called 'Anthologia Planudea' (Planudean Anthology) of the 14th century. The 'Anthologia Planudea' was compiled and arranged in 7 books by the Byzantine scholar Maximus Planudes, ca. 1260 - ca. 1305, from earlier collections. He added a number of poems, and chastised many of the poems he felt were too explicit. His Anthology was long time the only one known to Western Europe. It was first published in 1494 and was adopted by all subsequent editors until a much older, fuller and not chastised collection, the so-called 'Palatine Anthology', was discovered in 1606, six years after the publication of this edition of 1600, by the French scholar Claudius Salmasius, who found the manuscript in the Palatine Library at Heidelberg. The manuscript copy made by Salmasius was however not published until 1776, so until that year the 'Anthologia Palatina' remained lost from sight. After that the 'Anthologia Palatina' became the basis for all later editions of the Anthology, but until 1776 the 'Anthologia Planudea' held sway. § This Frankfurt edition of 1600 is a summation of all that 16th century scholarship could attain for the Greek Anthology. It remained the standard edition for nearly 2 centuries. It offers a reissue of the Greek text of the Anthology edition of the French scholar/printer Henri Estienne, or Henricus Stephanus, of 1566, and contains also a second revised and enlarged edition of the commentary of Brodaeus, and of Opsopaeus, including also 8 pages filled with the notes of Stephanus. § The need for annotation of such a complex and vast corpus of poetry was satisfied by the French scholar Johannes Brodaeus, or Jean Brodeau, 1519-1573, who was at the time of his death cannon of Saint Martin of Tours, his native city. He further produced 'Annotationes in Euripidis Tragoedias', (Basel 1558), and Notae in Martialem (Leiden 1619), but his best known work is his commentary on the 'Anthologia Planudea', which was first published by Froben in Basel in 1549. His commentary, which does not entirely ignore textual matters, was the main feature of that edition. The edition however did not contain all that Brodaeus had prepared. A manuscript containing his notes, which was much richer (longe auctius) in citations and scholia, was stolen after his death from the library of his heir, Victor Brodaeus (raptum a latronibus ex bibliotheca), who bought it back, saved it from a fire, and finally reached via several hands the editors of this 1600 Wechel Anthology. (Lectori S., p. §§2 recto) Brodaeus' work was to be for 2 1/2 centuries the only complete commentary of the Greek epigrams. He ransacked Greek literature from beginning to end for illustrative parallels, and his labors are 'in this respect probably not even now exhausted'. (J. Hutton, p. 6). The commentary was highly esteemed by the greatest classical scholar of his age, the Frenchman J.J. Scaliger, 1540-1609. In the 'Scaligerana' of Cologne 1695 (p. 68) he is recorded to have said: 'Brodaeus Turonensis Canonicus, vir maximus ac doctissimus fuit, cujus commentarios in Epigrammata Graeca pluris facio, quam quorundam scripta plurima'. 9 years before Brodaeus' commentary, in 1540, the German scholar Vincent Opsopaeus (died 1539) had published in Basel a commentary to the books 1-3 and 7 of the 'Anthologia Planudea', that offered a clear and simple exposition, and made some good if obvious corrections. His commentary gains also from good metrical Latin translations)(Provenance: On both boards the gilt stamp of the Scottish 'Society of writers to the Signet') (Collation: §§2, A-3F6, 3G4; alpha6, beta6, gamma4, delta8, epsilon6 (leaf epsilon6 verso blank) (Heavy book, may require extra shipping costs)
Book number: 107049 Euro 800,00