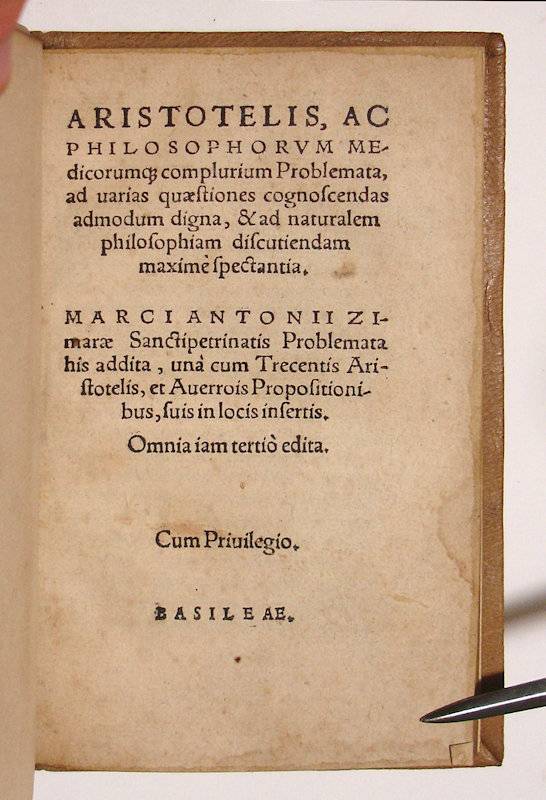 ARISTOTELES. Aristotelis, ac philosophorum medicorumque complurium Problemata, ad varias quaestiones cognoscendas admodum digna & ad naturalem philosophiam discutiendam, maxime spectantia. Marci Antonii Zimarae Sanctipetrinatis Problemata his addita, una cum trecentis Aristotelis et Averrois Propositionibus, suis in locis insertis. Omnia iam tertiò edita. Cum privilegio. Basel, (Basileae), (R. Winter), n.d. (ca. 1540) Small 8vo. 126,(2 blank) p. 20th century brown morocco 15 cm 'A Pseudo-Aristotelian text which offered its readers of all levels the satisfation of a causal understanding of daily phenomena' (Ref: VD16 P 4881; Not in USTC) (Details: Tasteful brown morocco, boards with a blind fillet border. The name of Aristotle gilt on the back. The edges of the bookblock are also gilt. The 'Problematum liber unus' by Marcus Antonius Zimara (filling 55 pages) which the title calls for, is unfortunately lacking at the end of this book. Nevertheless this is a remarkably fresh copy in a tasteful binding) (Condition: A faint and small waterstain at the right margin of the title, and the lower margin of the last leaf) (Note: 'The Aristotelian corpus not only established for some 2 millenia the definitions and standards for many branches in the natural sciences, but also founded a genre that respected neither the disciplinary boundaries nor the systematic presentations for which Aristotle is famous'. So, for instance, Aristotle's 'Problemata', a work composed in question-and-answer format, spawned a vigorous tradition of imitations, promising 'authorative philosophical, that is, causal, understanding, made pleasant through the variety and familiarity of the phenomena they explained'. (Ann Blair, 'The Problemata as a natural philosophical genre', in 'Natural Particulars: Nature and the Disciplines in Renaissance Europe', edited by A. Grafton & N. Siraisi, Cambridge MA, MIT, 1999, p. 170) Blair distinguishes in the Renaissance concerning the Problemata 'a high' or learned, and a 'low', and more popular career, ranging from erudite folio editions with commentary, to inexpensive editions of Problems of more recent composition. 'This eminently versatile genre offered its readers of all levels the satisfation of a causal understanding of daily phenomena and the pleasure of a varied accumulation of natural philosophical tidbits'. (Idem, p. 172). This Basle edition forms part of the low career of the Problemata tradition. It is a 'collection of problems first composed anonymously in Latin in the thirteenth or fourteenth century, probably in the German area; it is extant in some twenty medieval manuscripts and over one hundred printed edtions through the modern early period. (...) It uses the classic form to discuss largely medical topics, and appropriates the very same title as 'real' 'Problemata Aristotelis'. (Idem, p. 181) So this collection bears only a very vague relation to what we consider to be Aristotle's 'Problemata'. It is distinguished from Aristotle's work by the incipit 'Omnes homines' (naturaliter scire desiderant). The low tradition is with its ca. 250 questions also much shorter than the learned one, which numbers ca. 900 questions. Later on the low tradition received accretions of various kinds in the same strain, works of modern authors such as Marco Antonio Zimara. This Problemata text of the low tradition was incredibly popular in the 16th century. It is, as the title suggests, a collection of all kinds of problems and petty facts on biology, natural history and medicin. The sources are e.g. Galenus, Hippocrates, Boethius, Albertus Magnus et alii, including of course Aristotle, who's works seems to be the main source. The arrangement is the same as in Aristotle's Problemata, a question is asked (dioti/quaeritur/why), and an answer (ê hoti/respondetur/it is because) is given. The problems are on hair (e.g. 'ut dicit Albertus (Magnus), si pilus mulieris menstruosae ponatur sub fimo, ex illo generatur serpens venenosus', p. 7), on the head, the eyes, the nose, ears, mouth, teeth, tongue, palatum, neck, arms, hands, nails, breast, mammae, the heart, stomach, blood, urine, fur, spleen, intercourse, sperm, conception, children, etc. etc. In the early modern period many translations and adaptations of the low tradition were published, no doubt because of the prominence of questions about sex. 'Conception, birth, menstruation and lactation, gender differences of all kinds are one of the prime emphases of the 'Omnes homines' editions'. (Idem, p. 187) The high tradition of Aristotle's Problemata did finally decline in the 17th century, as the genre was gradually undermined by scepticism and the scientific revolution of that age. But the 'Omnes homines' editions continued to appear for another half century. 'By the late 17th century what had once been a respectable medieval compilation had moved increasingly down the market, most noticeably in German and English versions'. (Idem, p. 187) The vernacular editions of the Questions and Answers were bound with 'farmer's almanacs and home medical guides'. (Idem, ibidem) § We could not find out on which earlier edition this third edition (Omnia iam tertio edita) that was produced by Robertus Winter, was based. At any rate, it seems the earliest appearance of this title. We found no earlier one. Winter produced another edition in 1544. The book seems to be rare. We found only a few copies in KVK, and none in Rare Book Hub, formerly Americana Exchange) (Collation: a-h8, (leaf h8 blank) (Photographs on request)
Book number: 120205 Euro 900.00