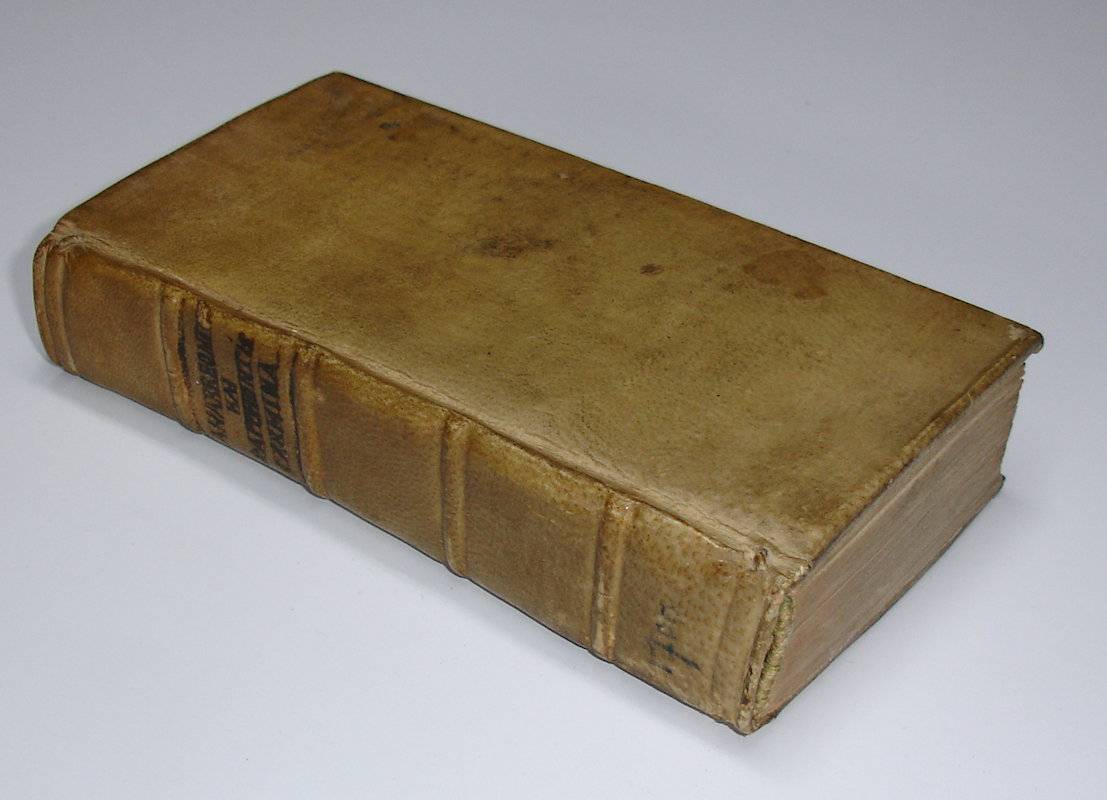 ANACREON & SAPPHO. TA TOU ANAKREONTOS KAI SAPPHOUS MELÊ, Anacreontis et Sapphonis carmina latine, italiceque conversa. Notas, & animadversiones addidit Tanaquillus Faber; quibus multa veterum emendantur. Recens omnia correcta uti nunquam prius, cum italica traductione Bartolomiae (sic) Corsini in calce apposita. Naples (Neapoli), In nova typographia Dominici-Antonii Parrino, 1700. 12ş. 2 parts in 1 volume: (XVI),286 (recte 288);56 p. Vellum 15 cm <Was the editor paid twice for his work?> (Ref: Hoffmann 1,132; Schweiger 1,24; Graesse 1,110; Ebert 550) (Details: Greek text with opposing Latin translation. There are two Italian translations, the first one is printed on the lower third of the page. The last 56 pages of the book contain the second translation; it has a title of its own: Traduzione di Anacreonte Poeta Greco in Verso Toscano di Bartolomeo Corsini nobile Fiorentino. Back with 3 raised bands. Title in red and black. The engraved coat of arms of Francesco Pignatelli at the beginning of the dedication) (Condition: Vellum age-tanned and spotted. Vellum on the upper part of the lower board gone. Both pastedowns detached. The tip of the right lower corner of the second title-page torn off, with the loss of a few letters) (Note: The poems of the Greek lyric poet Anacreon, born ca. 570 B.C., are concerned mostly with the pleasures of life. A few dozen fragments of his poetry survive. Also survive about 60 poems, the socalled Carmina Anacreontea, written in the next 6 centuries, once ascribed to Anacreon, that gave voice to the Anacreontic way of life, sensual longing and alcoholic festivity, wine, women and song. He enjoyed widespread popularity during antiquity. The 'editio princeps' that was published in 1554 'established 'Anacreontic' as a popular category for lyric poetry in several European vernaculars over the next two centuries'. (The classical tradition, Cambridge Mass., 2010, p. 43) Anacreon and Anacreontics were translated by Ronsard, Goethe, Belleau, and by the famous Madame Dacier. Her father and teacher, the classical scholar Tanneguy Le Fèvre, latinized as Tanaquil(lus) Faber, 1615-1672, published an edition of Anacreon and Sappho in 1660. § Despite its popularity the scholarly world lost interest in the Anacreontic collection in the course of the 19th century as it became obvious that the Carmina Anacreontea were not composed by Anacreon himself. As a consequence scholarship ever since has been very limited, and focuses upon questions of dialect, dating and the niceties of textual criticism. The fate of the other early Greek lyric poet, Sappho, figuring also in this 1700 edition, was the opposite. There are numerous editions, with or without notes and commentary, and translations. Monographs and articles on her and her poetry are plentiful. § This edition of 1700 is, for the Greek text, the Latin translation and the notes, a reissue of Tanaquil Faber's edition, Saumur 1660. The Latin translation was made by the French scholar/printer Henri Estienne, and first published in 1566. At the end we find the Greek text and Latin translation of two poems of Sappho, Poikilothron etc. and Phainetai etc. The Tuscan translation at the end of the book is of the Italian poet Bartolomeo Corsini, 1606-1673. It was first published in Paris in 1672. The Dizionario Biografico degli Italiani (Volume 29 (1983) is rather harsh about this translation, it is called pretentioza, and the Dizionario furthermore observes that Corsini lacked the taste and culture for this difficult task, ché il C. non aveva certo cultura e gusto adeguati a un compito così arduo. § The dedication, in Italian, is dated Napoli 5 Marzo 1700, and signed D.V.E. The dedicatee is the archbishop of Taranto Francesco Pignatelli, 1652-1734. This nobleman was created cardinal of Naples in 1703. (See Wikipedia) § After the dedication we found a loosely inserted four page leaf (a conjugate pair), containing the dedication of this same book, and also in Italian. The dedicatee is now the very rich English gentleman Samuel Thorold, second and last Baronet of Harmston, Lincolnshire. (See Wikipedia: George Thorold) Not much is known about this Englisman, who led a retired life. The epitaph of his grave, he died in 1738 at the age of 65, records inter alia that He was never more delighted, then when proper opportunities presented, for his shewing his benevolence to mankind, by endeavouring to make others as happy as he himself desired to be'. He had a studious disposition & a disapprobation of all vain ostantation in publick life. This second dedication is dated Nap. 20. Marzo 1700, and signed D.V.S. § It is obvious that the editor wanted to stimulate the benevolence of young mr. Thorold, who probably visited Naples in 1700 on his grand tour, with his flattering dedication (la sublimità del suo ingegno etc.) and that he wanted to profit for a second time financially with the presenting of a dedication copy. This book is very rare and seems to be only available in a number of Italian libraries. All three copies described in the OPAC SBN (ITICCUBVEE37721, ITICCUNAPE55283 & ITICCUPISE01437) only have the first dedication, and do not have the dedication to Thorold. The digitized copy of the Biblioteca Nazionale Centrale di Roma (BNCR) also lacks this second dedication. It is likely that only one copy, or perhaps there were a few, was printed for the occasion of stinging an English visitor for a certain amount of money) (Provenance: An old English shelf-mark on the front pastedown: Case A, shelf 1. § On the same pastedown in pencil: P.A. Kasteel. Petrus Albertus Kasteel, 1901-2003, was a wellknown Dutch journalist, civil servant and diplomat) (Collation: pi1, a6, A-M12; A-B12, C4 (after leaf a6 we found a loosely inserted four page leaf (a conjugate pair), unsigned)) (Photographs on request)
Book number: 120416 Euro 250.00