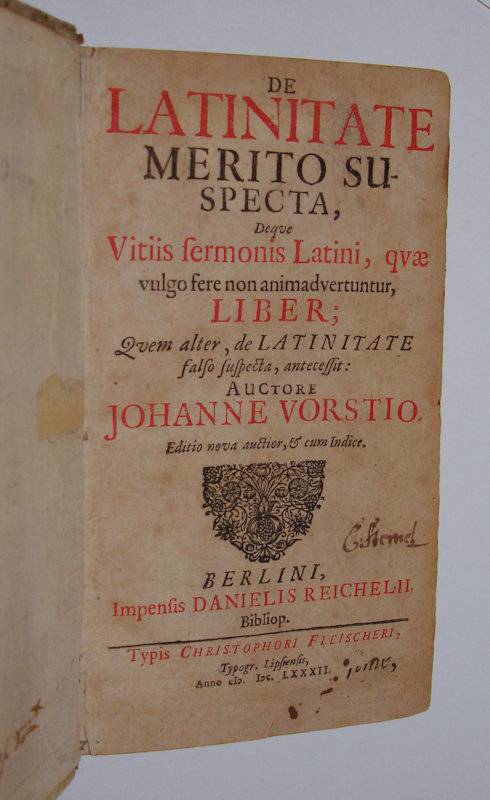 VORSTIUS,J. De latinitate merito suspecta, Deque vitiis sermonis latini, quae vulgo fere non animadvertuntur, liber; quem alter, de latinitate falso suspecta, antecessit, auctore Johanne Vorstio. Editio nova auctior & cum indice. (Bound with volume 2:) De latinitate falso suspecta, deque Latinae Linguae cum Germanica convenientia liber, auctore Johanne Vorstio. Adjecti sunt plenissimi indices. Editio tertia priori correctior. Ad 1: Berlin (Berlini), Impensis Danielis Reichelii, bibliop. Typis Christophori Fleischeri, 1682. Ad 2: Berlin, (Berolini), Sumptibus Joh. Fried. Gleditschii, 1690. 8vo. 2 volumes in 1: (VIII),282 (recte 272);(8 index); (XII);298;(26 index) p. Vellum 17 cm (Ref: Ad 1: VD17 12:130206A; Ad 2: VD17 3:314302R) (Details: 5 thongs laced through the joints. Manuscript title on the back. Title in red and black) (Condition: Vellum soiled and spotted. Front flyleaf removed. Small name on the first title. Blank lower corner of the first title cut off. Paper browning, as usual with German books of that period) (Note: The German philologist and theologian Johann Vorst, or Johannes Vorstius, 1623-1676, became after his studies master at several gymnasia (Flensburg, Berlin), meanwhile increasing his fame by producing learned books and editions of various Latin authors. The Philologia Sacra being the center of his work, he was also in his time one of the most distinguished experts on Hebrew. These works, his classical work, and his schoolbooks are now forgotten. He lives however on in the history of German linguistics, through a small booklet: 'Observationum in linguam vernaculam specimen' (Coloniae Brandenburg, 1669). Vorstius was inspired by the Roman linguist Varro, and as a sample of his intensive study of his mother tongue and its history, he offers in 19 chapters as many etymological monographies. Not one of his etymological studies is completely wrong, most of them actually are proofs of his admirable linguistic insight. Vorstius knew everything that was printed in Germany, the Netherlands, England and Scandinavia on the remains of older germanic languages. His arrangement of forms and meanings is chronologically generally correct, and he refrained from the irrelevant etymological riddles, that were so popular in his time. He didnot juggle with Hebrew, and showed his knowledge of Latin and Greek only in instructive parallels and analogies. (ADB 40,308/09) Traces of his linguistic and etymological interest can be found in the second part of De latinitate merito and falso suspecta, where Vorstius offers analogies between the Greek, Latin and German languages. De latinitate merito and falso suspecta is a study in Latin style, how to speak and write pure Latin. The correct use of Latin was in the 17th and 18th century still considered to be of importance. The use of exemplary Latin was for some scholars of that period the same as practising pure science. De latinitate merito and falso suspecta was first published in Berlin in 1669. Revised and augmented 2nd, 3rd and 4th editions appeared in 1674, 1669, 1682, 1698, 1703 and 1722) (Provenance: On the title in old ink 'C. Stemel') (Collation: Ad 1: ):(8, A-R8, S4. Ad 2: )(6, A-U8. X2) (Photographs on request)
Book number: 120191 Euro 190.00