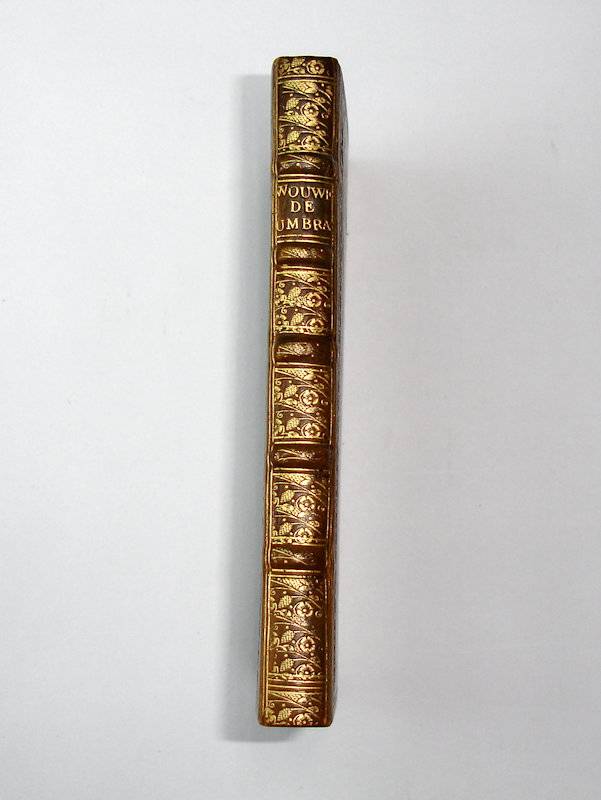 WOUWER,J. Ioannis Wouweri Dies aestiva, sive De umbra paegnion. Una cum Iani Dousae F. in eandem declamatione. Editio postrema castigatior, & adjectionibus in fine locupletior. Oxford (Oxonii), Excudebat G. Turner Impensis Guilielmi Webb, 1636. 12mo. (XXVIII),156,(22 index),(2 blank) p. Later calf. 15 cm (Ref: ESTC S120326) (Details: Back with five raised bands, and elaborately gilt. Boards with blind double fillet borders) (Condition: Small pencil note on the front pastedown and the title) (Note: The German scholar Johann von Wowern, or Wower, or Wouwer, 1574/75-1612, son of a Dutch religious refugee, studied law at the university of Marburg, and went in 1593 to Leiden to continue his studies, especially classics, at the newly established university. There he stayed for five years and established relations with the Dutch scholars Meursius, Scriverius, Heinsius and Baudius, and also with Scaliger. The arch-enemy of Scaliger, Caspar Scioppius, suggested maliciously that Scaliger had entertained illicit sexual relations with Wower. Wower published an edition of Petronius' 'Satyricon' (Lugd. Bat. 1596), the recension of which 'contains enough felicitous emendations to earn him the kind of immortality reserved to the chosen few: a place in the apparatus of modern critical editions'. (L. Deitz, 'Ioannes Wower of Hamburg, Philologist and Polymath. A Preliminary Sketch of His Life and Works', Journal of the Warburg and Courtauld Institutes Vol. 58 (1995), p. 138) Wower furthermore published Apollinarius Sidonius' Opera (Lyon 1598, reissued 1617), a rather worthless and partly plagiarized edition; Firmius Maternus' 'De errore profanarum religionum' (Hamb. 1603, reissued 1645), which was to remain the standard text for more than two centuries; 'Octavius' of Minucius Felix, (Hamburg 1603); 'Ad Q. Septimii Florentis Tertulliani opera emendationes epidicticae' (Francof. 1603 & 1612); Apuleius' 'Opera' (Hamb. 1606). His 'Syntagma de graeca et latina Bibliorum interpretatione' and 'Epistolarum centuriae duae' were published posthumously (Hamb. 1618). In 1610 Wower published in Hamburg his 'Dies aestiva sive de umbra paegnion', or 'A Summer's Day, or: a playful Poem on Shade'. The 'Summer's Day' 'belongs to the genre of mock-serious encomia in which so many humanists excelled and of which Erasmus's 'Praise of Folly' is the best-known example. These learned disquisitions praising lice, fever, baldnes, the bull of Phalaris, or the 'ens rationis', indeed anything unhealthy, ridiculous, preposterous, or unintelligible, tend to be amusing only at surface level concealing as they do the bitter pill of the moralist. Wower's short praise of shade is no exception and his intricate definitions of shade in general and the species into which it divides are clearly surservient to another purpose, albeit not a particularly original one: 'In this life, we pursue less things themselves than their shadows and semblances. Therefore, I fancied a sustained stroll and an incursion into (the realm of) Shade to give it my most heartfelt embrace. Indeed ... everything that mortals pine for and strenuously seek is... changeable, deceptive, unstable and liable to vanish with the precipitate haste of a shadow; a wise man should not even wish for these things'. (Dies Aestiva, 1610, p. C2 recto) The theme is trite, but its exposition and variations show great literary skill and perfect mastery of the Latin language. For what it is worth, I would not hesitate to qualify the Paegnion as a little 'chef d'oeuvre' of its kind'. (Op. cit. p. 141) See for Wower also 'Wowern' in: 'Allgemeine Deutsche Biographie' 44 (1898), p. 220) The 'Dies Aestiva' was reissued in 1617 and 1636. § The last 33 p. contain 'Iani Dousae F. in Laudem Umbrae declamatio'. This piece was first published in Leiden in 1591, by Wower's friend, the Dutch humanist scholar Janus Dousa (1545-1604), together with a 'Carmen' on this same subject. The poem has been omitted in this 1636 edition) (Provenance: On the front pastedown in pencil: 'Peter v. Veldhuijsen, 6/4/ '83') (Collation: A12, chi2, B-G12, H6, I12 (leaf I12 blank) (Photographs on request)
Book number: 120320 Euro 425.00