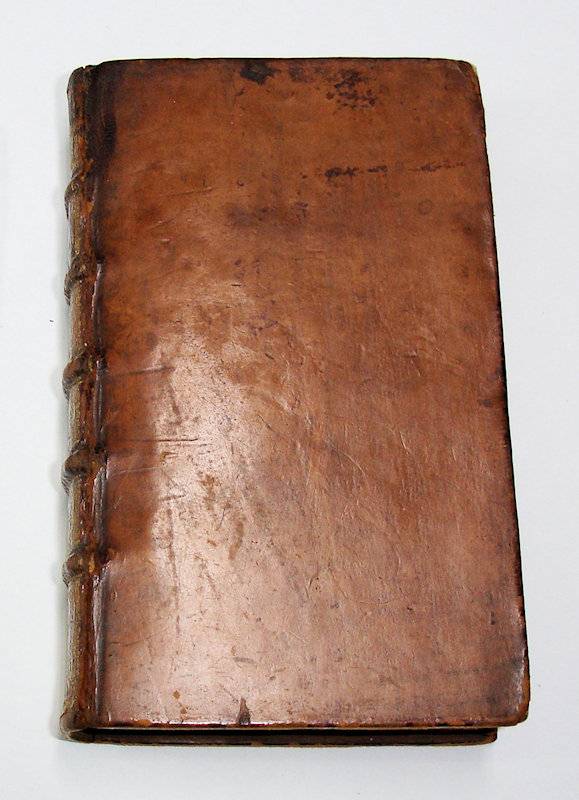 ANTHOLOGIA LATINA.- Epigrammata et poematia vetera. Quorum pleraque nunc primum ex antiquis codicibus & lapidibus, alia sparsim antehac errantia, iam undecunque collecta emendatiora eduntur. Paris (Parisiis), Apud Nicolaum Gillium, sub trium Coronarum signo, 1590. (Colophon at the end: Parisiis, Excudebat Dionysius Duvallius typographus, 1589, mense Septembri) 12mo. (VIII),191,(1 blank); 491,(1 blank) p. Calf 13 cm. The first edition which bears any resemblance to what is now the Anthologia Latina (Ref: Schweiger 2,6 (under Anthologia Latina); Graesse 2,486; Ebert 6804: 'very scarce and interesting'; Brunet 2,1017: 'recherché et assez rare') (Details: Back gilt elaborately, and with 5 raised bands. Red morocco shield in the second compartment. Woodcut printer's mark on title, depicting within a wreath a scepter and three crowns, the motto is hic labor. Edges dyed red. At the end, between 2K and 2L, a gathering has been inserted with signature 2K7-2K14, adding a panegyric of Porphyrius, a letter of Porphyrius to the emperor Constantine, a letter from Constantine to Porphyrius, and 'Phoenix incerti auctoris', from a codex owned by the French scholar and collector of manuscripts Franciscus Iuretus, or in French François Juret) (Condition: Wear to the extremities of the binding. Front joint slightly cracking, corners grazed. Some faint foxing. Small ownership inscription in ink on the verso of the first flyleaf) (Note: In 1590 the French scholar and jurist Pierre Pithou, latinized as Petrus Pithoeus, 1539-1596, published this Epigrammata et poematia vetera, which includes much material from the Codex Thuaneus, (B). Many epigrams and poems were published here for the first time. Pithou's edition is the first which bears any resemblance to what is now called the Anthologia Latina, an anthology or libellus of epigrams compiled around 500 A.D., probably in Vandal North Africa. There are four main manuscripts which form the basis of what is known as the Anthologia Latina. One of them, now indicated as B (Paris lat. 8071), was written in central France in the ninth century, and was once owned by Jacques de Thou, whence its usual name of the Codex Thuaneus. It was used by Pithou for this present 1590 edition. The existence of the most important manuscript for the Anthologia Latina, the Codex Salmasianus, was unknown in Pithou's time. The term Anthologia Latina is a 'modern designation, and derives from P. Burman the Younger's edition and specially his treatise which preceded it, the Specimen novae editionis Anthologiae Latinae. These works were published in Amsterdam between 1747 and 1773 (...)'. Anthologia Latina was then the title Alexander Riese gave to his two-volume Teubner edition of 1869/70'. (Epigrams from the Anthologia Latina: Text, Translation and Commentary (by) N.M. Kay, London 2006. p. 20) Pithou arranged his selection in four books, Ad sacra et mores pertinent, Elegia, Epitaphia and Miscellanea et amissa. 'His anthology nicely illustrates the major dilemma which (...) forces itself upon editors of this corpus (...) namely that of arrangement: confronted with diverse types of poetry originating from different mss., written by different authors (often anonymous) at different dates, should an editor try to impose order by subject matter (as Pithou chose), by date of composition, by author, by manuscript, or in some other way?' (Idem, p. 21) The edition of Pithou was reissued in 1596 (Lyon) and 1619 (Geneva). § Pithou, who owned a fine library, including an important collection of manuscripts, furthermore 'produced the first important text of Juvenal and Persius (1585) (...) and the editio princeps of Phaedrus (1596), the Pervigilium Veneris (1577), Salvianus (1580), and the Edict of Theodoric (1579) (...) He narrowly escaped death in the massacre of St. Bartholomew (1572) and became a Catholic in the following year'. (Sandys, 2,192)) (Provenance: Inscription on the verso of the front flyleaf: 'Précieux recueil pub. par Pithou. Je l'ai trouvé le 29 fevrier 1840, rare et précieux. Voyez La Biblioth. de Colomies ed. de 1731, p. 265, et le Dict. bibliogr. de Brunet'. Alas, no name) (Collation: *4; A-H12 (leaf H12 verso blank); 2A-2T12, 2V6. 2X12 (leaf 2X12 verso blank) (Between 2K and 2L a gathering has been inserted bearing the signature 2K7-2K14)) (Photographs on request)
Book number: 120354 Euro 750.00