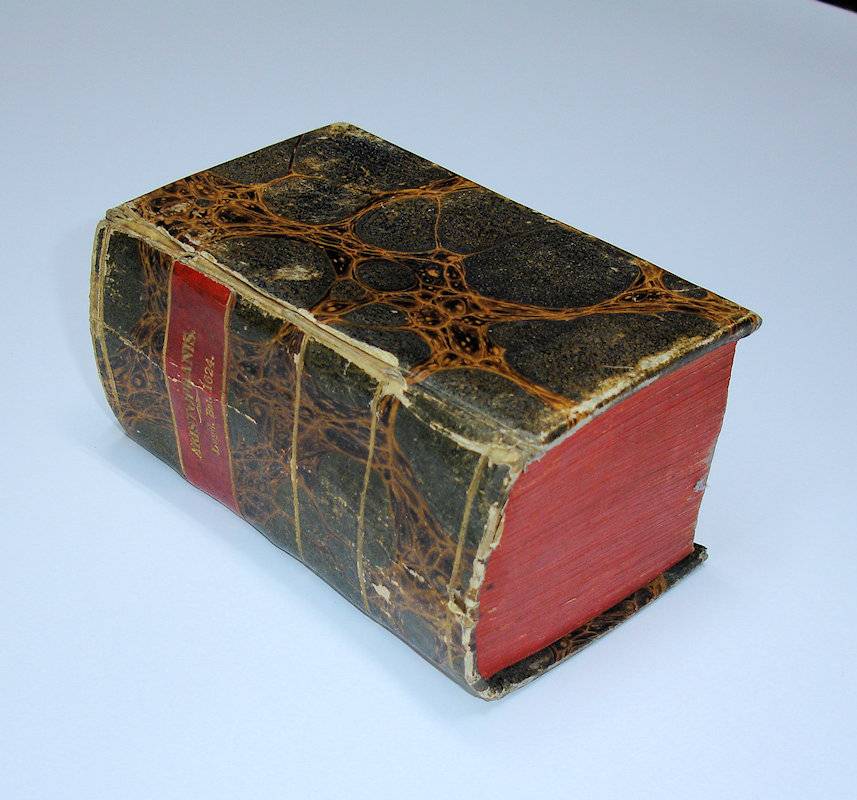 ARISTOPHANES. ARISTOPHANOUS KÔMÔiDIAI iá. Aristophanis comoediae undecim, graece & latine, cum indice paroemiarum selectiorum, et emendationibus virorum doctorum praecipue Josephi Scaligeri. Accesserunt praetera Fragmenta ejusdem ineditarum comoediarum Aristophanis. Leiden (Lugduni Batavorum), Ex officina Joannis Maire, 1624. 12mo. (XXIV),935,(1),56 (recte 60) p. Contemporary boards 14 cm (Ref: Breugelmans 1624,2, with a note on the date, he suggests a date after 1626; Hoffmann 1,254, a very elaborate description; Dibdin 1,299; Smitskamp, The Scaliger Collection 5; Brunet 1,453; Moss 1,94: 'a beautiful edition'; Graesse 1,207; Ebert 1090) (Details: Greek text and Latin translation. Binding: marbled paper over boards. Back ruled gilt, and with a red letter label. Edges dyed red. Printer's device on the title: a shoveling farmer, above his head the motto 'fac & spera'. 6 woodcut initials) (Condition: Binding worn at the extremities. Paper on both joints split. Back rubbed. Front flyleaf gone. Inner hinge a bit weak. The title leaf shows two small tears in the gutter) (Note: This edition has been praised by some critics; it contains a few short but useful notes by the famous French scholar Joseph Scaliger, 1540-1609. § Of the Greek comic playwright Aristophanes, ca. 455-385 BC, born in the radical democracy of Athens, survive 11 plays. In a less free society his genre became obsolete in his own time, and was later replaced by the harmless plays of Menander. 'Aristophanes' comic mode- a dramatic free form with an almost improvisational feel, great poetic and linguistic inventiveness, highly topical satire (public figures being named and personated on stage), and obscenity, beyond almost any subsequent standard of acceptability'- never again became a major theatrical tradition'. (The classical tradition, Cambridge Mass., 2010, p. 69) This opinion seems outdated. Aristophanes sounds very much like modern satyric comedy. He seems to be the creator of his own genre. The 2nd edition of the OCD, 40 years older, sounds more sympathetic. 'He had a keen eye and ear for the absurd, and the pompous; his favoured media are parody, satire, and exaggeration to the point of phantasy, and his favourite targets are men prominent in politics, contemporary poets, musicians, scientists and philosophers, and (...) for a wide public'. (OCD 2nd ed. p. 113) § Serious scholarly work on the text of Aristophanes begins in the 16th century, with Petrus Victorius, J.J. Scaliger and his friend Willem Canter. A new edition with Scaliger's notes was published posthumously in 1624 by Maire in Leiden, this edition. That Scaliger, a man with a sharp tongue, who had loads of ennemies, was an admirer of the comic playwright is no wonder. The following epigram can be read in the introduction to Scaliger's text of 1624: Ut templum Charites quod non labatur, haberent,/ invenere tuum pectus Aristophanes (The Graces have found for themselves a temple that would not fall down, your breast, Aristophanes). (p. *8 verso) The notes of Scaliger originate from two printed editions once owned by the great man himself, and furnished for publication by the Dutch scholar G.J. Vossius, 1577-1649 § The Latin verse translations of the Plutus, Nubes, Ranae, Equites and Archanenses were made by Nicodemus Frischlinus, that of the Vespae, Pax and Lysistrata by Q, Septimius Florens Christianus, and a prose translation of the Aves, Ecclesiazusae and Thesmophoriae by Andreas Divus. (Typographus lectori p. *2 recto). After the Greek text of Aristophanes' plays starts at page 898 a 16 page section 'Index vocum et versuum proverbialium', followed by 18 pages with 'Notae excerptae ex variis lectionibus, emendationibus, et coniecturis virorum doctorum, ac potissimum duobus exemplaribus manu Josephi Scaligeri emendatis, e Bibliotheca Gerardi Vossii.' At the end we find the 56 (recte 60) page Fragments section, which was once edited by the Dutch scholar Willem Canter, or Gulielmus Canterus, with a preface of Andreas Schottus and now produced by the Dutch theologian Willem van der Codde, or Gulielmus Coddaeus, 1574- after 1625) (Collation: *12, A-2Q12, A-B12, C6 (Pagination irregular in the fragments part at the end, between the gatherings A and B. The page numbers jump back from 24 at the end of A to 21 at the beginning of B, else all correct) (Photographs on request)
Book number: 120381 Euro 430.00