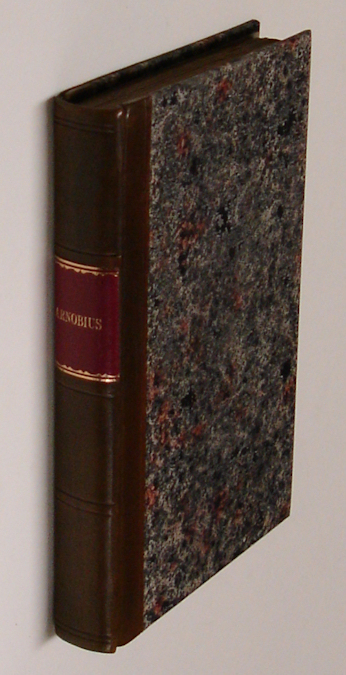 ARNOBIUS. Arnobii Disputationum adversus gentes libri septem, recogniti & aucti. Ex bibliotheca Theodori Canteri Ultraiectini, cuius etiam notae adiectae sunt. Antwerpen (Antverpiae), Ex officina Christophori Plantini, 1582. 8vo. 285,(1 errata, & 2 blank) p. Tasteful modern half calf. 18 cm (Ref: Belg. Typ. 172; STC Dutch p. 14; Adams A1996; Voet 596 variant A; Sorgeloos 113; Dibdin 1,215: 'An excellent edition, in which the modesty and learning of its editor are successfully opposed to the rashness of his predecessor Gelenius' (in his edition of 1546); Ebert 1219; not in Brunet) (Details: Woodcut printer's device on the title. Red morocco letterpiece on the back. The binder used a broad strip of vellum as spine lining; this strip was probably cut from an old manuscript contract) (Condition: Name on the title. Very small tear near the right lower corner of the title. Occasional old ink underlinings on ca. 70 pages. Right margin of the last 60 pages slightly waterstained, the last gathering however more so) (Note: Arnobius, a teacher of rhetoric at Sicca Veneria in Numidia, 'was suddenly converted to Christianity (ca. A.D. 295) and a year or two later, at the instance of his bishop, he wrote seven books 'Adversus Nationes', 'Against the Pagans'. 'His work throws light on the Christian-pagan debate immediately before the Great Persecution, while the venom of his attack on traditional Roman paganism shows that this was by no means dead'. (OCD 2nd edition p. 122) His style is easy-flowing. Arnobius makes little use of the New, and none of the Old Testament. His view of God is platonic. The unintended side effect of the efforts of Arnobius and other Church Fathers to ridicule or crush paganism, was that their writings form an archive which preserves knowledge and practices of polytheism in the years of its decline in late antiquity. § Just as the early christians bolstered their piety by contrasting it with the demonic foulness of pagan religion, so the protestants of the 16th century used their knowledge of pagan idolatry to scourge their catholic adversaries. Critics of Catholicism, like Calvin, compared catholic mass e.g. with the bloody rituals of the pagans, and used the sacrifices of the ancients to score theological points against their opponents. 'Protestants detected in the Catholic cult of images, the pagan idols so well described by late antique critics like Arnobius'. (The Classical Tradition, Cambr. Mass., 2010, p. 678, s.v. Paganism) The work of Arnobius was first published in Rome in 1542 (although the preface is dated 1543). Other editions followed in 1546, 1560 and 1580. Our edition of 1582 was produced by the Dutch scholar Theodorus Canterus (Dirk Canter), 1545-1617. He followed the edition of Gelenius of 1546, who sometimes rewrote the text 'ope ingenii' to make difficult passages intelligible. Canterus inserts some modifications of his own, and returns for readings to the 'editio princeps' of 1542, edited by Faustus Sabaeus. This was a wise policy and a sensible thing to do. Canter's textual and exegetical notes appear as endnotes. (See for Canter and his Arnobius edition 'History of Scholarship: A Selection of Papers from the Seminar on the History of Scholarship Held Annually at the Warburg Institute', edited by Christopher Ligota, Jean-Louis Quantin. Oxford University Press, 2006, page 97-100). § The history of classical philology saw strange creatures, and Dirk Canter sure was one. He was the brother of the great classical scholar Willem Canter, studied classics in Paris under Lambinus, but was the rest of his life primarily a political and religious adventurer in his hometown, the city of Utrecht. He was there mayor, political agitator, religious opportunist and extremist, a conspirator to overthrow the government of the city to seize power. He was banished in 1611. Still he managed to find time to produce this excellent scholarly edition and other philological work, such as 'Variarum lectionum libri duo', Antwerp 1574) (NNBW 1,558) (Provenance: the signature on the first and last page is probably of a member of the Soissy family, originating from the Champagne) (Collation: A-S8 (leaf S8 blank) (Photographs on request)
Book number: 130068 Euro 750.00