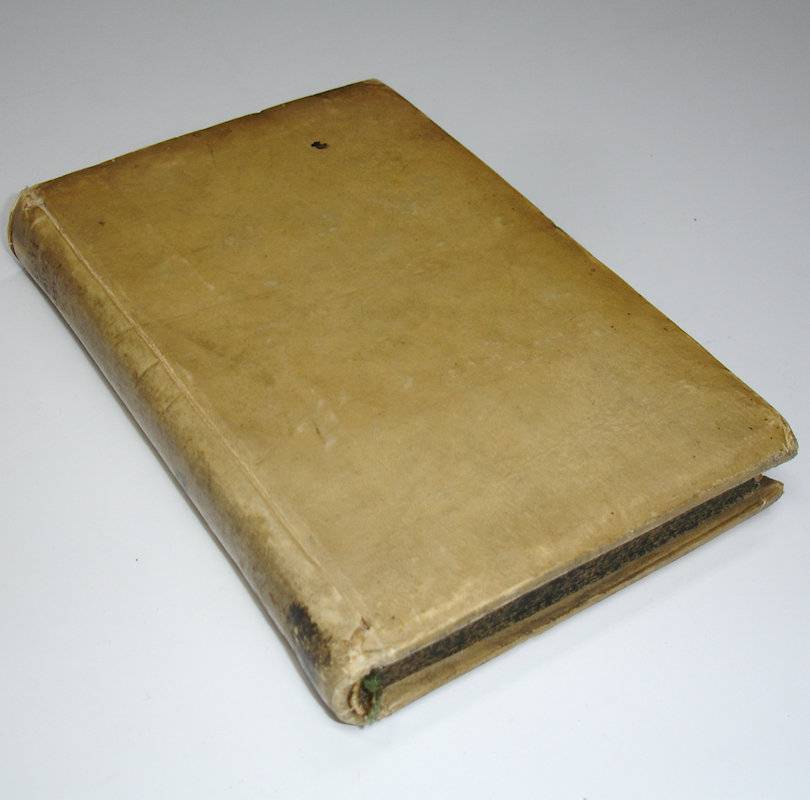 APICIUS. Apicii Coelii De opsoniis et condimentis, sive Arte Coquinaria, libri decem. Cum annotationibus Martini Lister, è medicis domesticis Serenissimae Majestatis Reginae Annae, et notis selectioribus, variisque lectionibus integris, Humelbergii, Barthii, Reinesii, A. van der Linden, & aliorum, ut & variarum lectionum libello. Editio secunda. Longe auctior atque emendatior. Amsterdam (Amstelodami), Apud Janssonio-Waesbergios, 1709. 8vo. Frontispiece, (XXXVI),(II blank),277,(43 index) p. Contemporary vellum. 19.5 cm. (Ref: STCN 182901963; Schweiger 2,8; Ebert 792; Brunet 1,343; Graesse 1,160; J.D. Vehling (Apicius bibliography) no. 9) (Details: Frontispiece designed and engraved by J. Goeree, depicting a Roman kitchen, a staff of 5 is preparing a meal; on the work surface rests an anachronistic codex recipe book. The preliminary pages contain a dedication, a preface, M. Lister to the Reader, and 'Judicia et Testimonia' of Apicius. The ten books of Apicius, with the notes of Lister, Humelberg 'et alii' occupy p. 1-277. Then 18 pages with 'Variae Lectiones' from a manuscript in the Vatican, and an index of 24 pages) (Condition: Binding age-tanned and worn at the extremes. Two black spots on the back. Paper severely browned) (Note: In 1705, Martin Lister, who was chief physician to Queen Anne of England from 1709 till his death in 1712, published an edition of the recipes of the Roman cook Caelius (or Coelius) Apicius. The collection is arranged in ten books, and is usually called 'De re coquinaria'. It is the only surviving cookery book that records Greek and Roman cuisine. It is thought to have been compiled in imperial Roman times. The recipes are organized similarly to a modern cookbook. § Apicius was at the beginning of the 18th century largely associated with gluttony and intemperance. 'In his lengthy Latin introduction, Lister tries to rescue Apicius from the charge of gluttony - and indeed to stress the health-giving properties of his recipes. Generations of moralizing historians had argued that the fall of Rome was at least partly down to excessive gourmandising. Lister takes the opposite view: the barbarian sack of Rome halted the Romans development of healthy, nourishing seasonings and sauces. Lister was, in the parlance of the time, a Modern. That is to say, he believed in the continuing progress of human learning since antiquity. He also believed in the application of modern scholarly techniques to ancient texts, and in studying a broader range of texts and topics than the fairly narrow classical canon than had traditionally been taught in schools and universities. His edition of Apicius is thoroughly formed by these principles: it presents one of the most neglected and marginal classical texts with all the apparatus of modern scholarship, and it also builds on the knowledge of that text - bringing Listers scientific knowledge to bear on Apicius recipes. One contemporary reader found such an expenditure of scholarly labour ridiculous: the application of considerable intellectual resources to a book about anchovy sauce and stuffed dormice. William King, a fellow at Christ Church, Oxford, was firmly an Ancient. He frequently bemoaned the fact that the Moderns were disregarding and denigrating the staples of the canon: above all, the epic poems of Homer and Virgil. Listers Apicius was evidence of the skewed priorities of the Moderns, and King hit upon the perfect way of satirizing it. In 1708, King published a book-length poem called The Art of Cookery'. It is one 'of the strangest works of eighteenth-century satire, Kings Art of Cookery is a rewriting of Horaces Art of Poetry (the most famous work of classical literary criticism) in which gastronomic instructions take the place of poetic ones at every opportunity. (...) Just as a scholarly turn to marginal authors like Apicius is threatening the status of canonical authors such as Homer and Virgil, so the general enthusiasm for such-newfangled delicacies as mushrooms and mangoes is threatening plain, traditional English cookery, as exemplified by roast beef and mutton. (Source and quotes: Henry Power, on 'The Recipes Project': recipes.hypotheses.org/tag/apicius). § This edition of Apicius' cookbook of 1709 is a considerably revised and augmented reissue of Lister's London edition of 1705. Added was also an index. It was produced by the Dutch classical scholar Theodorus Jansonius ab Almeloveen, who studied medicine and classics at the University of Utrecht. In 1697 he was appointed professor of Greek, history and eloquence, and later also of medicine at the academy of Harderwijk. There he produced a number of editions of ancient authors. § Van Almeloveen and Lister knew each other well. From 1694 they corresponded on ancient Greek and Roman medicine. In 1709 Van Almeloveen published also an edition of the works of the classical medical author Coelius Aurelianus, adopting notes of Lister. Lister is however best known as the leading arachnologist and conchologist of his time. He was the first to make a systematic study of spiders and their webs. His article in Wikipedia does not even mention his Apicius) (Collation: pi1, *8 (minus leaf *8) 2*8 3*4 (leaf 3*4 blank) A-V8)) (Photographs on request)
Book number: 152726 Euro 725,00