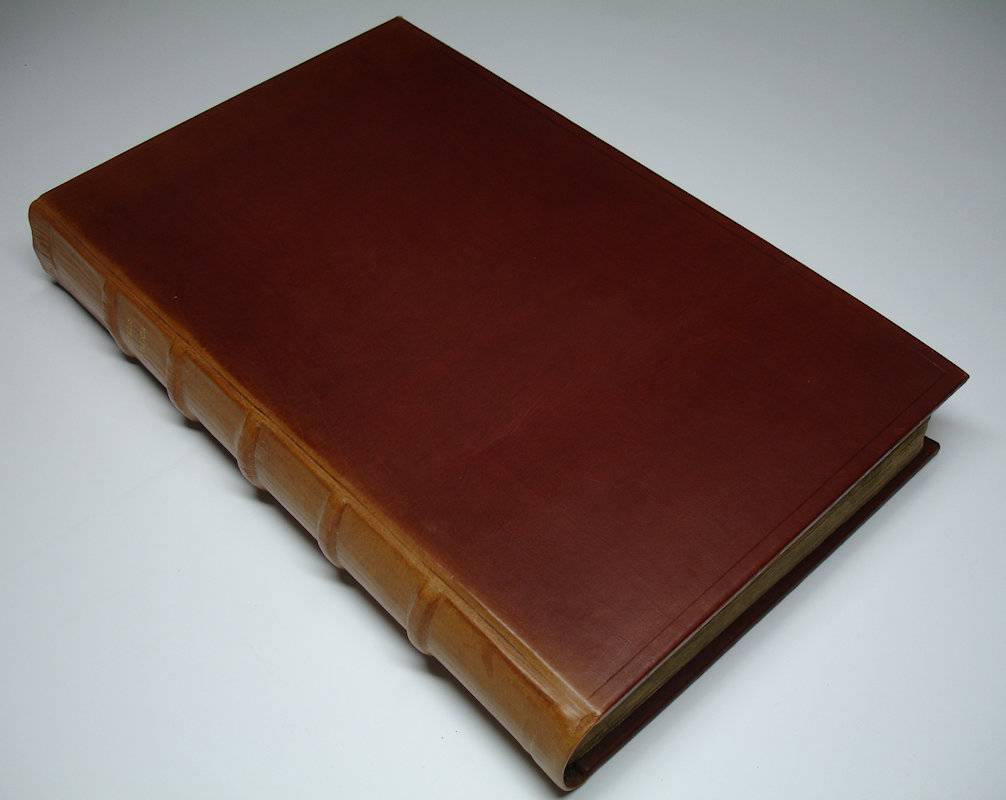 ARISTOTELES. Aristotelis Politicorum libri octo ex Dion. Lambini & Pet. Victorii interpretationibus puriss. graecolatini, Theod. Zvingeri Argumentis atque Scholiis, Tabulis quinetiam in tres priores libros illustrati, Victorii commentariis perpetuis declarati, Pythagoreorum veterum Fragmenta politica, a Io. Spondano conversa & emendata. Index rerum & verborum pleniss. Basle (Basileae), Eusebii Episcopii opera ac impensa, 1582. Folio. (XX),623,(12 index),(1 printer's mark) p. Modern calf 35.5 cm (Details: Nice copy, bound in modern full (red)brown calf, with 5 raised bands on the back. Spine short title in gilt: 'ARISTOTELIS / DE REPVBLICA'. Text in three columns, with the Greek in the centre flanked by the Latin translations of Piero Vettori and Denys Lambin respectively on each side. Large printer's woodcut device to the title and last page, depicting a bust of 'Hermes triceps' (three-headed Hermes) on a pillar; each of the heads wears a winged helmet; the middle Hermes holds in his right hand a caduceus, and in his left a bishop's staff (Episcopius!); from the pillar seems to hang a chopped off head. Large historiated woodcut letter on leaf a2, woodcut letters of various sizes throughout the text. Wide margins) (Condition: First and last leaf dust-soiled. Small and faint name on the title. Paper yellowing. Small bookplate on the front pastedown. 2 bookplates on the lower pastedown) (Note: The Greek scholar/philosopher Aristotle, 384-322 B.C., is one of the foremost names in the history of thought, and perhaps the most influential of all who have ever written. His influence on Werstern science and culture is immense. His boundless industry extended to most branches of higher learning. 74 treatises, genuine and spurious, have come down to us under his name. His 'Politics', literally 'the things concerning the polis', is among his best known and most widely read works. It embraces in 8 books the historical, theoretical and practical aspect of politics. To Aristotle 'politics were the very crown of philosophical study (...) and the ultimate end of the State to provide an environment in which those capable of the highest mental and moral development might attain thereto. (...) The important sections of this great work are the sketch of the ideal state, (...) the account of the various forms of government (...) the discussions of sovranty and responsibility and of kingship'. (H.J. Rose, 'A handbook of Greek literature', Oxford, 1965, p. 276) § This Basle edition of 1582 of the Politics adopts the Greek text, Latin translation and the famous commentary, earlier published by the Italian scholar Piero Vettori (Petrus Victorius), 1499-1585, at Florence in 1576. Vettori, professor of Greek and Latin in the 'Studio Fiorentino' at Florence, was the greatest Italian Greek scholar of his time. His best known works in the field of Greek philology are his commentaries on Aristotle's Rhetoric (1548), Poetics (1560), Politics (1576) and Nicomachean Ethics (1584). Every chapter (caput) in this Politics edition of 1582 is printed separately, followed by Vettori's very extensive and rich commentary. The Greek text is flanked by 2 Latin translations, one of Vettori, and one which the French scholar and Royal Reader in Greek, Denys Lambin (Dionysius Lambinus), 1520-1572, had published in Paris in 1567. Added to the chapters are, hot from the press, the notes and diagrams of the Basle professor of Greek and Moral philosophy Theodor Zwinger, (Theodorus Zuingerus), 1533-1588. He is best known for his editions of the Nicomachean Ethics (Basle 1566) and the Politica of Aristotle (Basle 1582), in which he transformed these works in a series of diagrams, analysing and showing their structures in systematic tables. Appended are the 'Pythagoreorum fragmenta politica' in the edition of the French scholar Jean de Sponde, or Johannes Spondanus, 1557-1595) (Provenance: Bookplates of: 'United Presbyterian Church. 'Brown library'. Glasgow, 66 Virginia St.' and of 'United Presbyterian College. Brown-Lindsay Library. Shelfmark 3C1.1 No. 5154'. § Small bookplate 'Bibliotheca Classica Stephaniana' of the Swedish classical scholar Staffan Fogelmark on the front pastedown. Fogelmark was Reader in Greek, 1972-85 at Lund University; Lecturer in Greek, 1985-96. University of Gothenburg: Professor of Greek, 1997-2004) (Ref: VD16 A 3582 & VD16 P 5468. Bibliotheca Bibliographica Aureliana 38, no. 108.655; Hoffmann 1,294. Griechischer Geist aus Basler Pressen no, 129. Ebert 1166; Graesse 1,214. Adams A 1914. Moss 1,129; Not in Brunet) (Collation: alpha6, beta4, a-z6, A-2G6,) (Photographs on request) (Heavy book, may require extra shipping costs)
Book number: 079269 Euro 1700.00