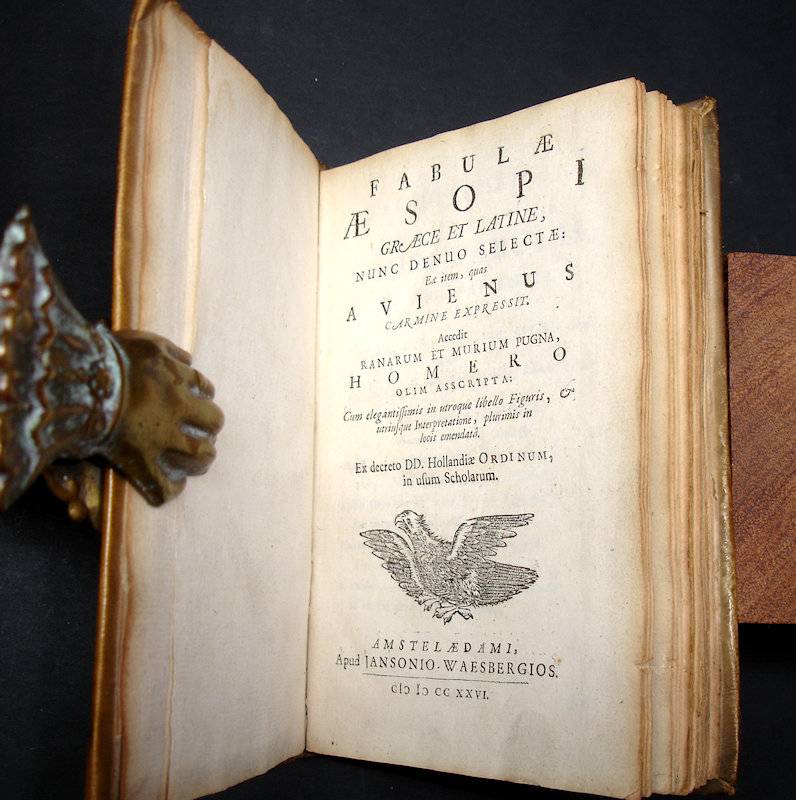 AESOPUS. Fabulae Aesopi graece et latine, nunc denuo selectae: Eae item quas Avienus carmine expressit. Accedit Ranarum et Murium Pugna, Homero olim asscripta: cum elegantissimis in utroque libello figuris, & utriusque interpretatione, plurimis in locis emendata. Ex decreto DD. Hollandiae Ordinum, in usum Scholarum. Amsterdam (Amstelaedami), Apud Jansonio-Waesbergios, 1726. 8vo. 134,(2) p. Vellum. 16.5 cm (Ref: STCN ppn 24265830X; Ebert 224; Moss 1,25; E.J. Kuiper, 'De Hollandse 'Schoolordre' van 1625', Groningen 1958, p. 129/30; Hoffmann, 1,70) (Details: 3 thongs laced through the joints. Woodcut printer's mark on the title. Each of the 42 fables of Aesop is preceded by a lovely woodcut showing a scene from that fable, and made by the Dutch artist Christoffel van Sichem II, drawn from often used and sometimes repaired woodblocks. The 'Batrachomyomachia' is illustrated with 6 woodcuts of warring frogs and mice) (Condition: Vellum age-toned and slightly soiled. Inner hinge of quire C and D a bit weak) (Note: This collection consists of 3 parts; first come 40 fables of the Greek poet and archfabulist Aesopus (6th century B.C), printed in 2 columns, Greek text with parallel Latin translation, then Avianus' 42 fables in Latin elegiac verse (ca. 400 A.D.), and finally the 'Batrachomyomachia', the 'Battle of Frogs and Mice', a comic epic ascribed to Homer, Greek text with opposing Latin translation. It was probably compiled and edited by Daniel Heinsius, professor of Greek at the University of Leiden from 1609. Aesop is introduced with a poem in Greek, called 'De Aesopi Fabulis et ejus sapientia', by Daniel Heinsius. The 'Batrachomyomachia' is introduced by a 5 page 'argumentum Batrachomyomachiae', also by Heinsius. It concludes with a Greek poem by Heinsius, 'In Batrachomyomachiam'. The first edition of this schoolbook was published in 1626, reissued several times, in Leiden in 1632, in Amsterdam in 1649, 1653, 1660, 1672 and 1726, and in Utrecht in 1669, 1685, 1699, and for the last time in 1727, in Utrecht and in Amsterdam. § The collection was commissioned by the Provincal Governments of Holland and West-Frisia for the use in local 'Latin schools' in the Western part of the Dutch Republic. In 1625 they decreed that the same set of rules should apply to all public schools in their provinces. The schools should have the same order of classes and lessons, the same schedule, school books, authors, mostly Roman, and exercises. The percentage of lessons dedicated to Greek was at the beginning around 13 %. The only Greek editions, apart from Aesopus, were of Homer (3 books, 1626, 1635 & 1642) and Aphthonius (1626)) (E.J. Kuiper, 'De Hollandse 'Schoolordre' van 1625', Groningen, 1958, p. 80) Greek might be the 'fons omnis sapientiae atque eruditionis', nevertheless it was taught only to support the knowledge of Latin, and to the advance of rhetorical skills) (Collation: A-H8, I4) (Photographs on request)
Book number: 156855 Euro 370.00